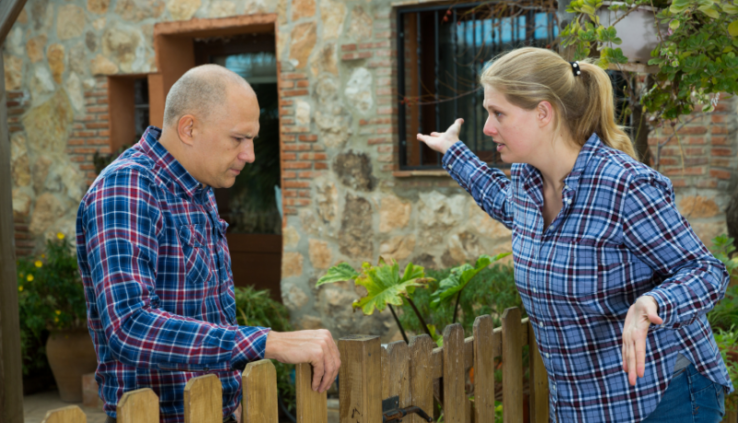 Encroachment of a building on your property

It is clear that the boundaries of your property mark out the dimensions of your ownership.  The picture is equally clear with suburban houses which have dividing fences. The same rules apply for duplexes with dividing walls. The picture becomes a bit more complicated when dealing with strata titled properties. The high-rise buildings on the South Perth foreshore and in Crawley are well known examples of strata titled property developments.

Depending upon the age of the strata complex, difficult problems can arise in determining the boundary of one strata unit from either a neighbouring unit, or from the common area of the whole complex.  The location of the boundary line may depend on whether the internal wall, the centre of a party wall, or some other boundary marking is relied upon. As a result, the location of the actual boundary line can determine property rights, whether within your unit, the neighbouring unit, or in the common area of the complex itself.

One case springs to mind on this very point. It concerned the proper location of the boundary line at or near the external windows to a unit.  The owner of the unit modified the fixed windows in order to allow access to the outside patio and to improve the passage of air into the unit. However, the council of owners of the complex threatened legal action against the unit owner in order to restore the previous windows. The power to modify the windows largely rested upon the question of whether or not they were located within that owner’s unit. If so, they had the right to modify the windows in their unit. If not, the windows were located within the common area of the strata plan (which was controlled by the council of owners).

Yet, even when the boundaries to your property are clearly marked, problems can arise in other forms. For instance, it is possible that a shed or garage (or even a dividing fence), may have accidentally been built within the boundary line of your property.

Encroachment onto your property

Where the whole or part of a building has been erected within the boundaries of your property, it is referred to in law as an ‘encroachment’. It doesn't matter what form the encroachment takes. It could be in the form of a shed or garage, a fence or wall, or even a house.

Indeed, the problem was compounded when the neighbour decided to develop the land on their vacant site by building their own high-rise building! It’s not a well-known fact that there is a procedure available under the Property Law Act of WA to remedy such a problem. Either of the land-owners (i.e. the encroaching owner or the owner of the encroached land) can apply to the Court for a range of orders tailored to provide a ‘just and equitable’ solution.

The Property Law Act provides that if the Court is satisfied that:

Then, the Court may:

Alternatively, if the Court is satisfied that the encroachment was erected due to a mistake as to the boundary line (and if just and equitable in the circumstances), it can grant relief to the:

Such relief may be available in the form of:

In reaching their decision, the Court cited an earlier case which considered the circumstances of encroachment including:

In relation to fault, the Court found that there was no evidence pointing to the Plaintiff’s fault for the construction of the fence. Instead, it was the Defendant’s fault as they were put on notice of the correct boundary location by virtue of the plan attached to the contract of sale. In relation to the extent and duration of encroachment, the Court found that the Plaintiff acted promptly once it became aware of the encroachment (which was a significant encroachment of 7 metres).

(Removal of encroachment and parties ordered to share costs of removal)

Sometime in 2009, the Perpetual Trustee (PT) commenced proceedings, seeking orders for the removal of encroaching objects (a shed, carport, eaves and guttering) from PT’s driveway lot. In the alternative, PT sought compensation for the transfer of ownership of PT’s encroached land to S. The estimated costs for removal amounted to approximately $64,000. If removal of the encroachment was undertaken, a further $65,000 would be incurred as a result of devaluation of the property. However, if the encroachment were to be permitted to remain, the diminution of the value of the driveway would only amount to about $5,000.

The Court had to carefully exercise its wide discretion conferred by the Act. First, it declined to make an order for removal of the gutter as it had no practical effect on the driveway, and the cost of removal would be substantial. However, the Court found that the shed and carport were more substantial encroachments. As such, these encroachments were considered a significant impediment to any future sale of the property. Accordingly, the Court permitted their removal, and ordered the parties to share the cost.

The issues in this action were whether the Minister should pay compensation to B and, if so, how much?

The issue of compensation was within the ambit of the Court’s wide discretionary powers, as per the South Australian equivalent of the Property Law Act. Notably, the words ‘make such orders as it deems just’ and ‘as it deems proper’ conferred a very wide discretion. As such, the Court took into consideration the purpose of the Act (which was to provide a fair means of adjusting rights). It applied where encroachments occurred - to avoid innocent people from facing detriment because of errors which were not their fault.

Nevertheless, the Court held that B was still entitled to compensation. This was because the Minister had, without payment, appropriated the use of B’s land by erecting an assembly hall which extended across the private road. That appropriation occurred with knowledge that part of the private road was not their land. As a result, the Minister had committed a deliberate trespass, which the Court could not endorse.

On the matter of compensatory value, the Court did not find any proven ‘current market value’. Nor was there any significant detriment to the loss of use of the encroached land. In the circumstances, the Court vested the ownership of the encroached land in the Minister. The Minister was also ordered to provide compensation in the sum of $900 due to the deliberate trespass.